Historically Iran has been referred to as "Persia" or similar (La Perse, Persien, Perzië, etc.) by the Western world, mainly due to the writings of Greek historians who called Iran Persis (Περσίς), meaning land of the Persians. In 1935 Rezā Shāh requested that the international community refer to the country as Iran. Opposition to the name change led to the reversal of the decision, and in 1959 both names were to be used interchangeably. Today both "Persia" and "Iran" are used interchangeably in cultural contexts; however, "Iran" is the name used officially in political contexts.

Ancient times
In 334 BCE, Alexander the Great invaded the Achaemenid Empire, defeated the last Achaemenid Emperor Darius III at the Battle of Issus in 333 BCE. Following the premature death of Alexander, Iran came under the control of Hellenistic Seleucid Empire. In the middle of the 2nd century BCE, the Parthian Empire rose to become the main power in Iran and continued as a feudal monarchy for nearly five centuries until 224 CE, when it was succeeded by the Sassanid Empire. The Sassanids established an empire roughly within the frontiers achieved by the Achaemenids, with the capital at Ctesiphon, and were alongside the Byzantines the two most dominant powers in the world for nearly four centuries. Most of the period of the Parthian and Sassanid Empires were overshadowed by the Roman-Persian Wars, which raged on their western borders for over 700 years. These wars exhausted both Romans and Sassanids, which arguably led to the defeat of both at the hands of the invading Muslim Arabs.

Middle Ages (652–1501)
The prolonged Roman-Persian wars, as well as social conflict within the Empire opened the way for an Islamic invasion of Iran in the 7th century. Gundeshapur was the most important medical centre of the ancient world at the time of the Islamic conquest. Initially defeated by the Rashidun Caliphate, Iran later came under the rule of their successors the Ummayad and Abbasid Caliphates. The process of conversion of Iranians to Islam which followed was prolonged and gradual. Under the new Arab elite of the Rashidun and later Ummayad Caliphates Iranians, both Muslim (mawali) and non-Muslim (Dhimmi), were discriminated against, being excluded from government and military, and having to pay a special tax. In 750 the Abbasids succeeded in overthrowing the Ummayad Caliphate, mainly due to the support from dissatisfied Iranian mawali. The mawali formed the majority of the rebel army, which was led by the Iranian general Abu Muslim. After two centuries of Arab rule semi-independent and independent Iranian kingdoms (such as the Tahirids, Saffarids, Samanids and Buyids) began to appear on the fringes of the declining Abbasid Caliphate. By the Samanid era in the 9th and 10th centuries Iran's efforts to regain its independence had been well solidified. 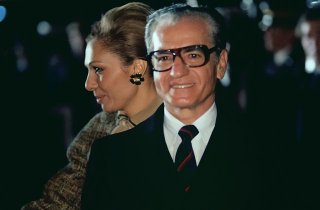 Shah Reza Pahlavi
In 1921 Reza Khan, Prime Minister of Iran and former general of the Persian Cossack Brigade, overthrew the Qajar Dynasty and became Shah. In 1941 he was forced to abdicate in favor of his son, Mohammad Reza Pahlavi, after Iran came under British and Russian occupation following the Anglo-Soviet invasion that established the Persian Corridor and would last until 1946.

Mosaddegh, Iranian democracy advocate and deposed PM in Pahlavi dynasty
In 1951 Mohammad Mosaddegh was elected prime minister. He became enormously popular in Iran after he nationalized Iran's petroleum industry and oil reserves. He was deposed in the 1953 Iranian coup d'état, an Anglo-American covert operation that marked the first time the US had overthrown a foreign government during the Cold War.

Islamic Republic (1979-)
Ayatollah Khomeini returns to Iran after 14 years of exile on February 1, 1979.
The Iranian Revolution, also known as the Islamic Revolution, began in January 1978 with the first major demonstrations against the Shah. After strikes and demonstrations paralyzed the country and its economy, the Shah fled the country in January 1979 and Ayatollah Ruhollah Khomeini returned from exile to Tehran. In April 1979 Iran officially became an Islamic Republic, after its establishment was supported in a referendum.
A referendum in December 1979 approved a theocratic constitution. Although both nationalists and Marxists joined with Islamic traditionalists to overthrow the Shah.

Hassan Rouhani was elected as President of Iran on 15 June 2013, defeating Mohammad Bagher Ghalibaf and four other candidates. The electoral victory of Hassan Rouhani has improved Iran's relations with other countries.