HOLIDAY IN IRAN - TREKKING - On the footprints of Shah Abbas...

Weekend on the footprint of Shah Abbas
A part of central Desert of Iran is located in northeast of Aran & Bidgol City,  called Maranjab. One of the most well-known and scary sand dune areas of Iran – Band e Rig – next to Marenjab Caravanserai on the historical Silk Road.

This Caravanserai was built in 11th Century (safavi era) in order of Shah Abbas to protect the commercial path of desert from Turk and Uzbekian Bandits. Marenjab is renovated in a historical style and opened recently his doors for an adventurous overnight stay. This old well preserved walls tell you stories about the Amir Kabir Murder and exciting Nights with Princes Shahzadeh.

Another unique landscape phenomenon is the big salt lake in front of the Caravanserai. He covert 2500km² between Qom, Semnan and Isfahan. His snow-white glittering crystals try to seduce you to walk inside – but be careful, it could be your last nightmare.

Itinerary: Teheran – Kashan – Marenjab – Kashan - Teheran
Tour character: we will enjoy the fabulous  landscape of  Dasht e Khevir with an appr. 5 hours hiking trip between sand dunes and salt lake. Guided Tour with Austrian’s experienced desert scout  Herbert Kössner. Be a part of his stories and adventures in a bewitched place under the stars in Milky Way on the road of silky way. Please bring also tolerance for a simple but clean accommodation without any luxury but enchanting romance. 2nd Day a visit in Kashan Fin Garden. Lunchtime in a Restaurant*
Incl. Services: Luxury Minibus, Full Guided Tour, overnight stay in Marenjab caravanserai, extensive Dinner, Breakfast, Sightseeing Fin Garden Kashan,

Fin Garden
Or Bagh-e Fin, located in Kashan, Iran, is a historical Persian garden. It contains Kashan's Fin Bath, where Amir Kabir, the Qajarid chancellor, was murdered by an assassin sent by King Nasereddin Shah in 1852. Completed in 1590, the Fin Garden is the oldest extant garden in Iran.
The garden was developed further during the Safavid dynasty, until Abbas II of Persia (1633-1666). It was highly recognized during the reign of Fat′h Ali Shah Qajar and was considerably expanded.
The garden subsequently suffered from neglect and was damaged several times until, in 1935, it was listed as a national property of Iran.

Amir Kabir
Mirza Taghi Khan Farahani known as Amir Kabir (1807 - 10 January 1852), also known by the titles of Atabak and Amir-e Nezam; chief minister to Naser al-Din Shah Qajar (Shah of Persia) for the first three years of his reign and one of the most capable and innovative figures to appear in the whole Qajar period. Amir Kabir served as Prime Minister of Persia (Iran) under Naser al-Din Shah.
Born in Hezaveh, a county of Arak and put to death in 1852, he is a controversial historical figure. He is considered by some to be "widely respected by liberal nationalist Iranians" as "Iran's first reformer", a modernizer who was "unjustly struck down" attempted to bring "gradual reform" to Iran.
The initial purpose of the institution was to train officers and civil servants to pursue the regeneration of the state that Amir Kabir had begun, but as the first educational institution giving instruction in modern learning, it had far wider impact. The instructors were for the most part Austrians, recruited in Vienna by Daʾud Khan, an Assyrian who had become acquainted with Amir Kabir during the work of the Ottoman-Iranian border commission.  The Austrian instructors initially knew no Persian, so interpreters had to be employed to assist in the teaching; but some among them soon learned Persian well enough to compose textbooks in the language on various natural sciences.

In the south of Iran he made similar efforts to restrict British influence in the Persian Gulf, and denied Britain the right to stop Iranian ships in the Gulf on the pretext of looking for slaves. It is not surprising that he frequently clashed with Dolgorukiy and Sheil, the representatives of Russia and Britain in Tehran. In order to counteract British and Russian influence, he sought to establish relations with powers without direct interests in Iran, notably Austria and the United States. It may finally be noted that he set up a counter-espionage organization that had agents in the Russian and British embassies.

Shah Abbas is the architect of a pavilion in the center of a typical Persian Paradise Garden. A visit in Kashan´s Fin-Garden takes you in a fabulous world, a world full of fairy tales, charmed Kings and Alchemy.
The King was indeed whom Amir Kabir wanted to contest the throne him, so he removed from 1851 of his Office and the fin garden after Kashan was exiled, where he was murdered a year later in his Hammam. 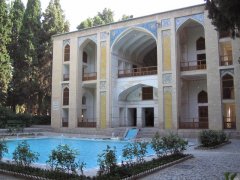 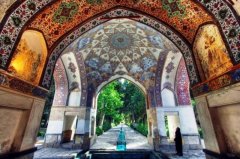 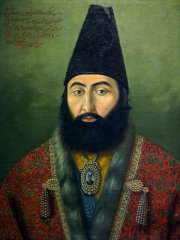 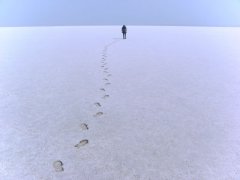 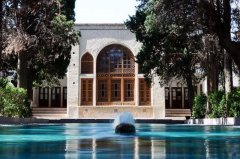 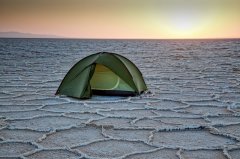 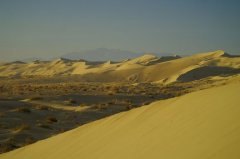